Doesn’t Take Long to Brew Up a Revolution! 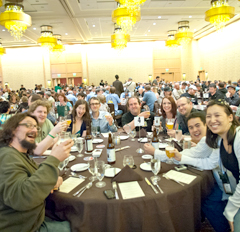 If the pace of sell-out for this year’s AHA National Homebrewers Conference caught you by surprise, you’re not alone! This year’s conference sold out in a mere 20 hours, outpacing last year’s then-record sell-out time of approximately two days.

It’s been a few years since the AHA Conference took place on the East Coast, so we suspected demand for Brewing Up a Revolution in Philly would be high. But with capacity nearly double last year—3,400 total attendees in 2013 versus 1,800 total conferencegoers in 2012—selling out quite this fast would have been hard to forecast.

How else has the AHA Conference grown? Have a look at the numbers:

Stay tuned for more information about the Pro-Brewers Night, conference speakers and more as the event draws closer.